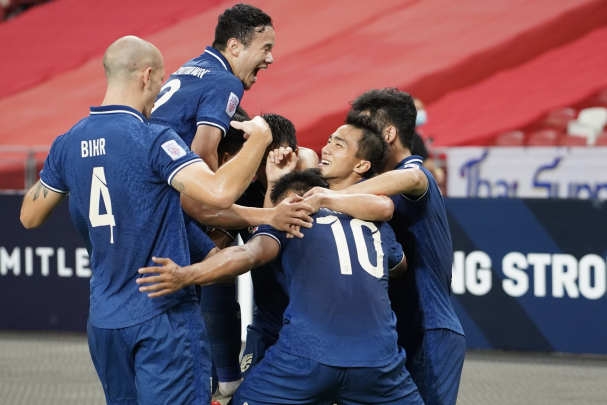 The first leg of the AFF Suzuki Cup 2020 semifinals had excitement and drama as surprising results were the order of the day from the twin matches held this midweek in Singapore’s National Stadium.

Thailand delivered when it mattered, constructing a 2-0 advantage going into the second leg that would be played at Boxing day.

Chanathip Songkrasin found holes in the Vietnam defense, scoring both goals. In the first one, he found an unobstructed path towards goal after last man Nguyễn Phong Hồng Duy tripped himself chasing the breakaway Thai captain. Chanathip then chipped the ball over goalkeeper Trần Nguyên Mạnh to breach the scoresheet at the 14th minute.

Garuda, Lions play to a draw

Indonesia and Singapore forced each other to a 1-1 draw to set up an exciting second leg on December 25.

Asnawi Mangkualam and Witan Sulaeman of Indonesia worked together to score the first goal of the match at the 28th minute.

The hosts countered at the 70th minute after Faris Ramli passed a through ball to Ikhsan Fandi for the conversion.

Tommy - July 28, 2021 0
Chelsea have opened ‘official talks’ with Sevilla over a deal for highly-rated defender Jules Kounde. Thomas Tuchel is keen to strengthen his squad with the...